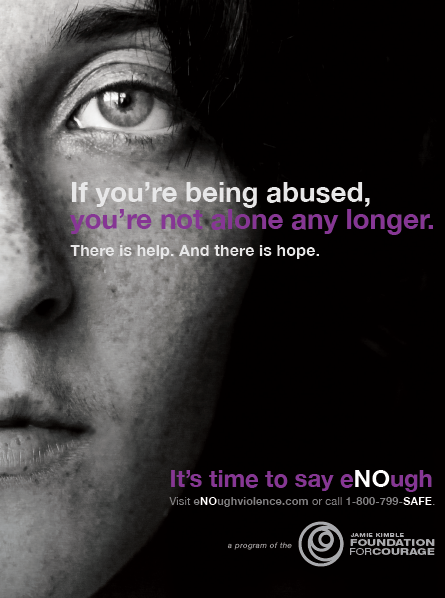 Domestic violence is a worldwide problem that crosses racial, age and socio-economic barriers. North Carolina began their “eNOugh” campaign in 2012 to bring awareness to the problem of domestic violence. Statistics from eNOugh’s website report 1 in 4 women experience violence at the hands of an intimate partner. It’s not just women who experience abuse by an intimate partner; an estimated 15% of cases involve men.

The impact goes further than the individuals involved. Nationally, estimates show employers lose $5 billion a year due to intimate partner violence; and domestic violence is the number one cause of homelessness for women and children. The NC Department of Justice reported 108 murders in 2013 classified as domestic violence, with Guilford and Mecklenburg Counties leading the way. Entire families and communities are impacted by this violence.

Physical abuse may not happen at the beginning of a relationship, but there are often signs that an individual may have a “battering personality.” These can include jealousy, controlling behavior, placing blame on others, pushing you to move too quickly in a relationship, breaking objects, or abusing animals and children (lacking empathy). Verbal abuse is another sign, including verbal put-downs or embarrassing you in public.

Abusers want to control your life, and may interfere with relationships between you and your family or friends, refuse to allow you to work or go out by yourself, threaten you or your loved ones, or even threaten to commit suicide. A great resource with additional information is The National Domestic Violence Hotline™ (www.thehotline.org or 1-800-799-SAFE).

When children are raised in an environment where domestic violence exists, they begin to believe that this behavior is normal and they can suffer long-term damage that can interfere with their relationships with others. There is a great video on YouTube that was created by the Office for Victims of Crime that details the impact of domestic violence on children.

Teens are also vulnerable as they begin dating and may be pressured by a partner who they believe loves them into allowing controlling or violent behavior. Get more information by visiting the National Dating Abuse website or calling their helpline at 1-866-331-9474.

One of the most dangerous times for a victim of domestic abuse is when she or he tries to escape the violence, but there are resources available. Here are some options:

There are civil and criminal legal remedies available to victims of domestic abuse. No one should have to live in fear. Get help today.