A Tribute to Walter F. Brinkley 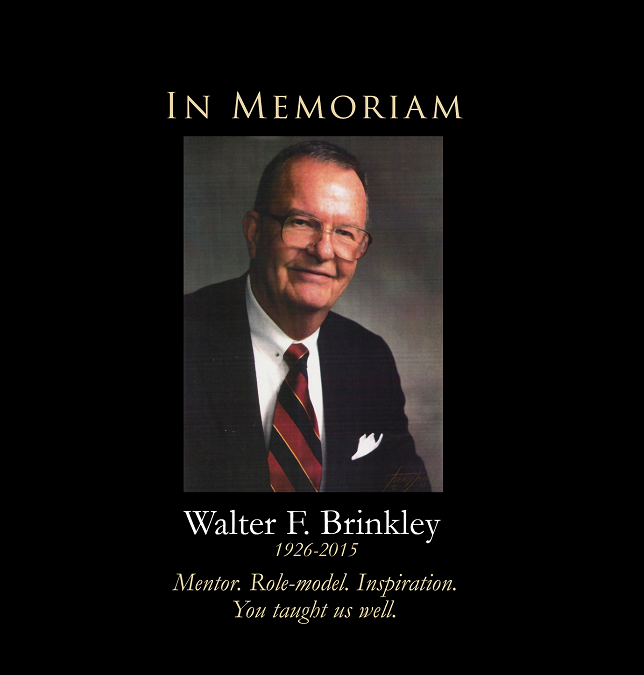 Mentor, friend and beloved former senior partner Walter F. Brinkley passed away on April 6, 2015 at the age of 88. Walt was an inspiration to those of us who knew him. He was a role model, mentor and leader whose commitment to providing legal services to the community truly made the firm what it is today.

“Walt Brinkley was the epitome of the “citizen lawyer” and to many he was their “Atticus Finch,” says David Inabinett, Managing Member of the firm, referring to the fictional attorney in Harper Lee’s novel, To Kill a Mockingbird. “He believed everyone, no matter their income or status, should have qualified legal representation. His leadership at the community and state level and his pro bono efforts were instrumental in starting Legal Aid of NC. The firm today still maintains a strong level of service to the community based on Walt’s teachings.”

The Walter F. Brinkley Scholarship Fund at Davidson County Community College was established to honor Walt Brinkley’s service to the community and to the law firm that bears his name. The Fund is managed by the Davidson County Community College Foundation, Inc. Those wishing to contribute in Walt’s memory may do so by sending checks to DCCC Foundation, P.O. Box 1287, Lexington, NC, 27293. Questions should be directed to Jenny M. Varner, Executive Director at the DCCC Foundation at jmvarner@davidsonccc.edu or (336) 249-8186, ext. 4685.